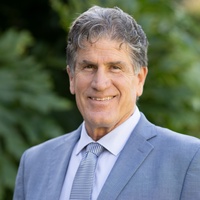 Born October 6, 1953 in Spokane, Washington, the third of five children, Tim Tremblay was fortunate to move to southern California where he and his family have lived since 1959. He has lived in Santa Barbara since 1964. He and his wife, Marcia, have been married 31 years and have three children and three grandchildren.

Football has played a dramatic role in his life, beginning the day he entered Bishop Garcia Diego High School (1967-1971). The following are the recognitions earned while playing the game in high school: All Southern California, All Tri-Valley League, team captain and MVP. He graduated from Bishop High School with an Honors Diploma.

During his years at Santa Barbara City College (1971-1973) Tremblay continued to excel in football, where he received several honors, including the “Muy Hombre” leadership award, team captain and All Western States Conference.

In 1977 Tremblay attended the California Western School of Law in San Diego.

Tremblay was a volunteer football coach for nine years (1991-2000) at Bishop Diego High School and for the American Eagles-Christian Outreach football team.

Mr. Tremblay was hired by Prudential-Bache Securities in 1983 where he received the designation as “Senior Vice President-Investments.” He was named to the President’s Council in 1987.

In May of 1995 Mr. Tremblay joined Cruttenden Roth as a “Senior Vice President.”

In June of 1997 Mr. Tremblay began his own independent investment firm in Santa Barbara. Since opening in 1997, Tremblay Financial Services has grown to 8 financial consultants and a support staff of 10. Each of the financial consultants have their Series 7 and various other Securities Registrations. Most of our financial advisors have their Life, Disability, and Long Term Care Insurance licenses as well. Tremblay Financial Services has been named the “Reader’s Choice-Number One-Full Service Brokerage Firm in Santa Barbara” by the readers of the Santa Barbara New Press in 2004, 2005, 2006, 2007, 2008, 2009 and 2010.

Mr. Tremblay currently serves on the board of directors of the following organizations: the Westmont College Foundation, the Santa Barbara Athletic Round Table (past President), the Bishop Garcia Diego High School Trustees, the Endowment for Youth and the finance committee of Our Lady of Sorrows Church.