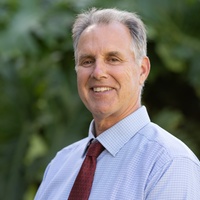 Jeff Chaffin has been a part of the Santa Barbara community since 1973.  As a graduate of Dos Pueblos High School, Jeff was a three sport athlete, playing football, basketball and baseball.  He was captain and M.V.P. of the football team while earning All-Channel league honors and was selected to play in the Santa Barbara County All-Star football game.  He was also an All-Channel league pitcher for the baseball team.

After High School, Jeff attended Santa Barbara City College where he concentrated on football.  Jeff was Captain and M.V.P. of the team while earning All-Western States Conference and All-America honors.

Jeff was offered a scholarship to play football at U.C.L.A. where he earned his bachelor’s degree in Sociology.  While a Bruin, he was a member of Two Rose Bowl Championship teams, earned All-Pac 10 honors and was selected “Most improved player on defense”.

Mr. Chaffin played professional football for the San Antonio Gunslingers of the United States Football League.  Some of the other teams he spent time with in the USFL were the L.A. Express, Philadelphia Stars and the Memphis Showboats.

Jeff was selected as a free agent by the Super Bowl Champion L.A. Raiders in 1984 and spent time with the Philadelphia Eagles, L.A. Rams and the Green Bay Packers.

To round out his professional career, Jeff had a short stint in Canada with the Winnipeg Blue Bombers.

In 2008 Jeff was selected to the Santa Barbara Athletic Roundtable Hall of Fame.

Since retiring from football, Jeff has honed his skills as a Performance Trainer, working with high school athletes and teams in the areas of weight training, speed and agility and proper football technique.  He continues to pursue this passion of giving back.

In 2017, Jeff joined Tremblay Financial as a Financial Advisor.